My objective for the year is to experiment more and record the progress here. Some experiments will evolve beyond initial experimentation others I'm sure will sit on the shelf. Follow my progress here.

Posted by ChrisPenn at 09:53 No comments: 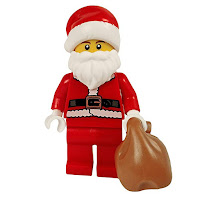 Posted by ChrisPenn at 16:02 No comments:

A few weeks ago The Micro:bit Express got an upgrade with a new motor controller from 4tronix Read more here(link). Two weeks down the line I bought another one as I was so impressed with it. Now I have updated the code for the remote control to use the pins to allow independently remote control two separate Lego Trains. You can see a brief but shaky demo of this working below:

Below are the hex files for the two trains and the remote control.


Over the last year I have been gradually tweaking away at iterations of controlling Lego Trains with code. Here is the most recent attempt from the summer link.

Recently the Kitronic motor controller that I had broke / wore out. I needed a replacement, I initially tried a cheap motor controller from China, which worked but I struggled with dealing with the connections of wires / not being able to get a consistent response from the motors. This is more an indication of my lack of finesse with this sort of thing than the motor controller being inappropriate Les wrote a blog especially as ever the man is a saint(link).

Then two weeks ago I saw Les Pounder was testing a new smaller, cheaper motor controller from 4tronix. So I read up on it here (4tronix blog for about Drivebit link ) and then bought one  (You can buy the Drivebit here). Delivery charge was cheap and it came the next day, which was a bonus.


Here it is in action:

I used Microsoft Makecode, and eventually settled on the code below, which uses the 4tronix extension which can be added on the extensions section. It isn't apparently there but if you type in the following URL in the extensions search bar it will appear: https://github.com/4tronix/DriveBit

Here is what the code looks like(please note the motors should be directed fwd and back but I will edit at some point): 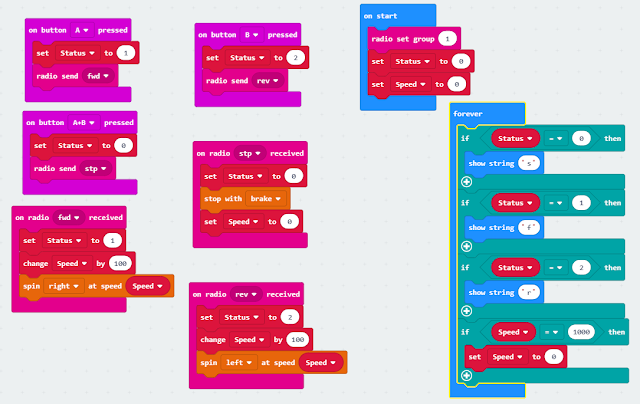 Posted by ChrisPenn at 06:57 No comments:

I will be creating a series of new resources over the next 6-8 months focused on learning CS using the Micro:bit in combination with Minecraft. The plan is to build up from the basics into more advanced topics.

Challenge four: "What an array of blocks"

I'm sure this will change completely but that's all part of the fun :)

Posted by ChrisPenn at 15:29 No comments:


The aim of this blog is to give a small token of thanks to Alan O'Donohoe. I could write a heck of a lot about how helpful he has been over the past few years to me. From the podcast link, to the Raspberry Jams, the empowerment through pertinent and timely advice. He is a legend but here is what other people had to say .............

"In 2013 Alan introduced me to the Python community in the UK via PyCon UK. This started my career writing Python code for projects in publications across the world. Alan's tenacity and enthusiasm are infectious and are a continuous source of drive for us all."

"I love everything about Alan. From his flamboyant shirts, to his infectious character. If I ever need advice then I know that I can simply ask Alan. I think I first met Alan whilst working at CPC maybe 5 years ago, but since then, I’ve attended many events alongside him, and we run Raspberry Jams together. Alan never fails to amaze me. He really knows his stuff and he leaves a lasting impression wherever he goes. Alan. I salute you."

"Alan is a good friend and a very inspirational character. I first met Alan at Preston Raspberry Jam back in September 2015 and he was amazed by a small project that I had made. He then enthusiastically created a YouTube video about it. Since then Alan has supported me with planning talks and sessions, as well as helping me with my GCSE examinations."

"Alan has helped me by providing opportunities to meet others interested in computing in schools e.g. the monthly science museum get together. His friendliness has always made me feel included"

Josh Lowe
"Well, Alan started me off in the tech space so I have a lot to thank him for. If it wasn't for the Jams and the people who he connected me with, nothing that I have done in the past 6 years would have happened and it's the same story for a lot of people. Our community all comes back to Alan starting a small jam in Preston, ultimately."
Josh Lowe's dad Dave

"Joshua’s mum and I own Alan so much. When josh was 8 years old he was really starting to get into tech and coding and we had no idea what to do to help him. Lara started to look on line to see what groups there were out there. She came across the Preston Raspberry Jam and we took Josh along to see what it was all about. At the jam we met Alan and told him all about Josh and the problems that we were facing. That night changed our families lives forever. Alan put us in contact with people like Les Pounder, Chris Dell and Jason Meares. These people have helped to shape and nurture Josh into the young man he is today. Through Preston Raspberry Jam Josh has acquired the skills to do talks and presentations and of course it was the birth place of EduBlocks. We will be forever indebted to Alan and can not thank him enough for all that he has done for Josh."

"Alan was always a friendly, knowledgeable and inspiring supporter on Twitter, sharing computing resources, tips and teaching techniques. I have had the pleasure over the years to work with him. He has an ability to develop while still empowering you. He truly is an enabler, bringing out the best in others. Alan is kind, funny, smart and has made a real difference to Computing at both the educational level and the human level. His can also pull off the coolest shirts."
John Witts
"I can't recall the first time I met Alan, I think we had chatted online many times before actually meeting up... Alan has always been really supportive of me through Exabytes and I remember meeting with him at BETT one year where he sat me down with a coffee and gave me some the best advice I have ever had about running the Hull Raspberry Jam (I am still working on implementing what he told me!)..."
Spencer Organ
"6 years ago I went to Manchester to the first Jamboree and met this larger than life character. Without really being asked I ended up volunteering at the event. Alan showed me the true value of community and how so much can be achieved with the enthusiasm and backing of like minded people. I have run numerous events since (not all Raspberry Pi or technology) and the lessons I learnt from Alan in Manchester still ring true today."

Nick Hughes
"Full ideas and sage words of wisdom. Helped me think though a lot of ideas and given me great advice. He has infectious enthusiasm. "
Drew Buddie
"He is THE loveliest of people. I was just saying how highly esteemed he is in my eyes :-) Well. If ever anyone in education was worthy of receiving an MBE then its Alan."
I think thanks is a dish best served communally.
Cya :)

Posted by ChrisPenn at 15:17 No comments:

During #Exabytes19 I ran a session on using Micro:bits with Minecraft. All the demos are included in the zip file below:

They are all pulled from the BitIO blogs which you can access here. To make it easier to plug and play with the demo's I have put 10 of them all in the above zip file. They can be accessed in the 'src' folder. If you read through the getting started with BitIO blog then you will have all the key information you will need to get started.

I hope you find this useful, I intend to use it at enrichment sessions in the new academic year and hopefully future Raspberry Jams.

Chris
Posted by ChrisPenn at 14:41 No comments: